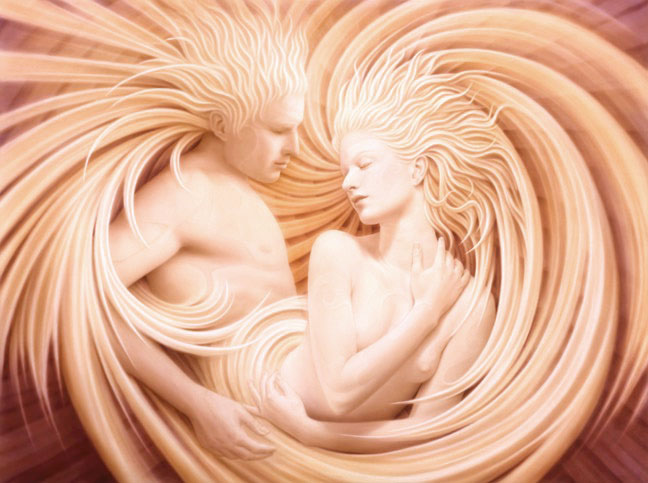 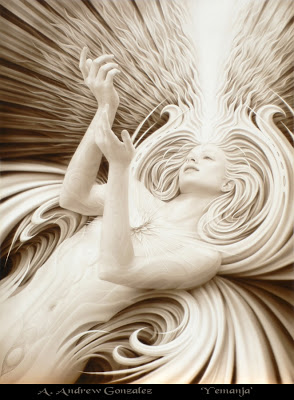 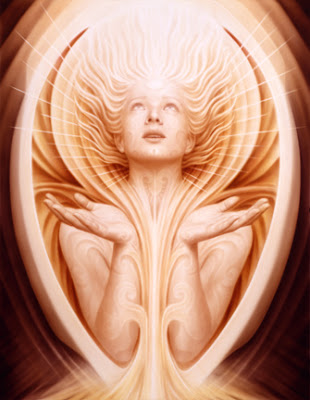 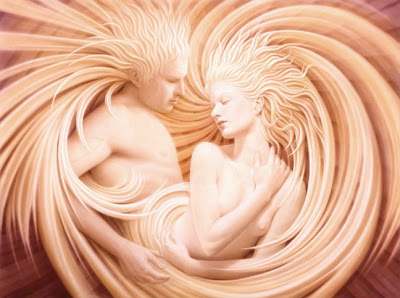 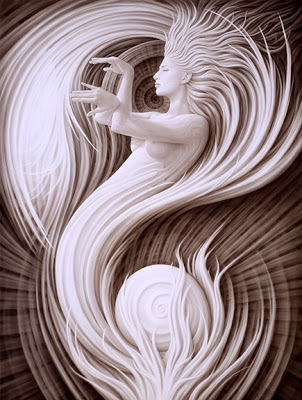 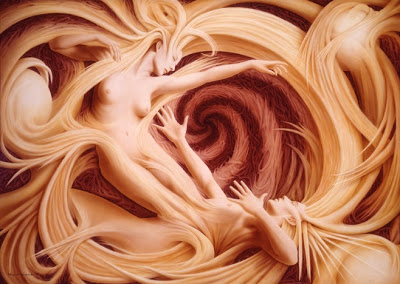 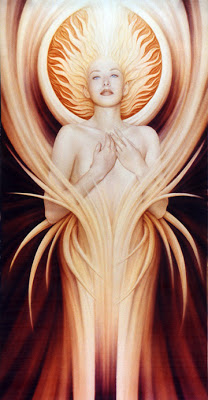 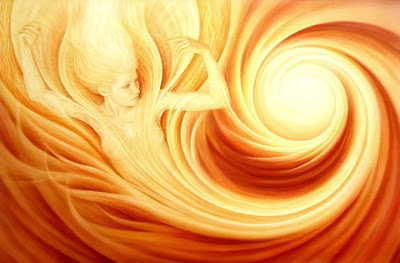 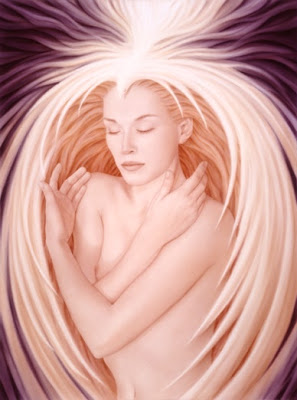 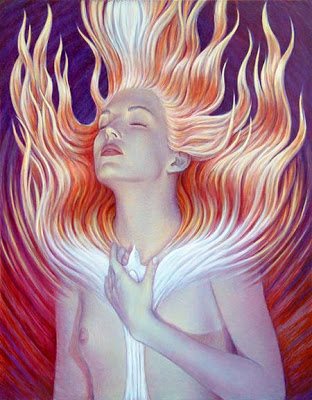 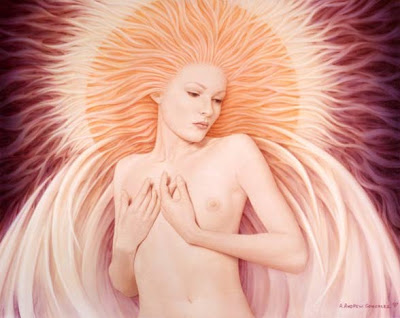 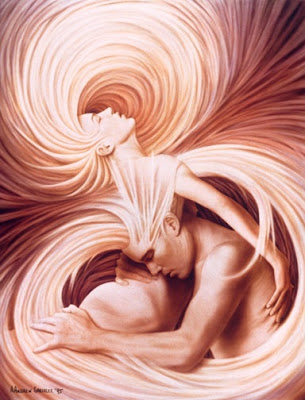 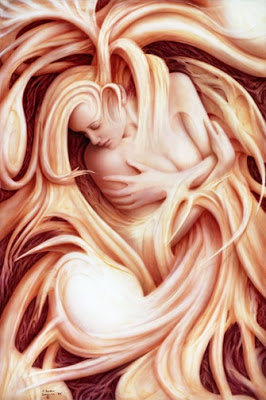 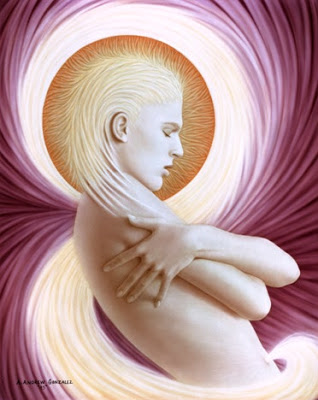 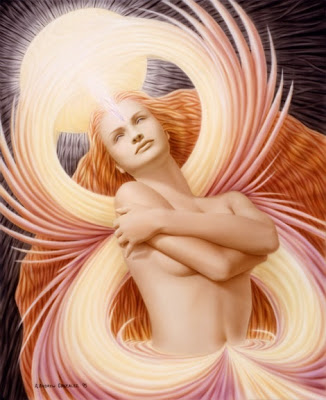 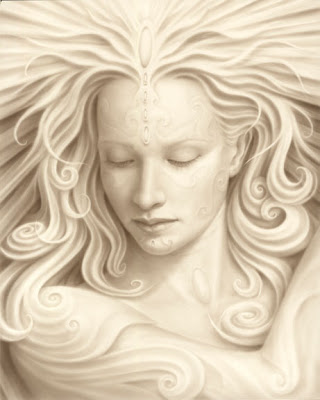 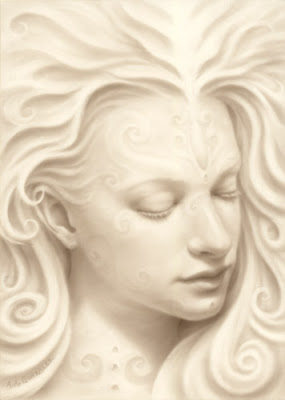 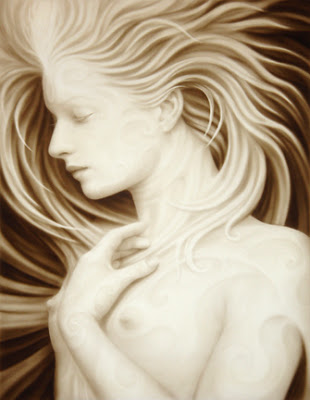 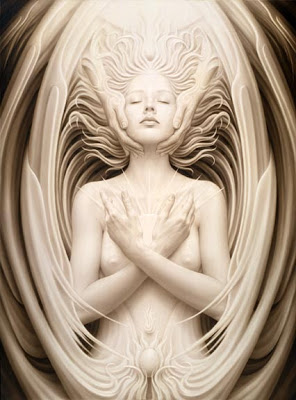 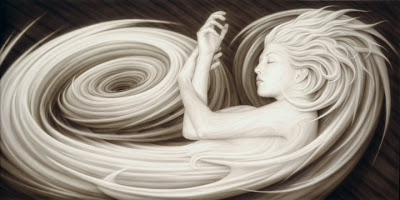 A. Andrew Gonzalez, of San Antonio, Texas, is an award-winning figurative artist whose work has been exhibited in several countries. Born on October 13, 1963, and raised in a creative family, Andrew’s art education is largely self-taught. His artist father, Anthony A. Gonzalez, encouraged his early interest in drawing and painting but gave him no formal training.
In the year 2000, Andrew Gonzalez had the distinct privilege to work closely with the well-known Fantastic Realist artist Ernst Fuchs in Monaco and Austria. Photos of the experience can be seen at L. Caruana’s website.
The paintings of Gonzalez are created with airbrushed acrylics on panel or canvas. Forms, values and highlighting are created by lifting pigment with an abrasive eraser, followed by the application of transparent layers of pigment. Influenced by idealism in the mystical, visionary and esoteric traditions, the artist describes his work as a contemporary Tantric or Transfigurative Art that explores the dramatic union of the sensual and spiritual. His work is akin to a revival of classical neoplatonic ideals centering on the figure as temple and vessel sublimed by transformative forces.

Raised in an artistic family, the tools for creative expression were a familiar part of my world. As a child, drawing gave me playful access to the exciting contents of fantasy and imagination. This playful communion with fantasy would later mature into the creative exploration of the patterns of my soul, and the celebration of the forces of life.

My childhood preoccupation with dreams and imaginal worlds would soon lead me to the masters of imaginative painting. But it wasn’t mere “fantasy” art that would call to me, but an art with a particular revelatory power. I longed for an art that would contemplate the jewel of wisdom hidden within and reveal the glory and mystery of being, an art sublimed with grace and beauty, subtle, yet profoundly ecstatic and mythically bold in its declaration.

The augurs of this revelatory art that would initially inspire my imagination would be found within the visionary and mystical art traditions and disseminated within the movements of Symbolism, Art Nouveau, Surrealism and Fantastic Art. As a young teenager it was Dali’s “Nuclear Mysticism” that first captivated my imagination, then followed by the preeminent work of Ernst Fuchs, William Blake and the mystical idealism of Jean Delville. And later as a young adult, the creative eye of my soul marveled at the prodigious possibilities brought forth by the ominous visions of H.R. Giger, the crystalline vistas of Robert Venosa and the transparent transfigurations of Alex Grey.
The kinship I felt with these artists gave me the conviction and hope that was vital during the initial development of my artistic skills and vision. Their mastery of technique combined with a clear and unique vision was certainly a prime motivating force. Above all, these revelatory artists, as well as many others, inspired my faith in the possibilities of what is yet to come in the art of the soul and spirit.

My early interest in all things arcane and mystical arose from my sensitivity for synchronistic experiences and profound vivid dreams, which in turn lead me to question our common perceptions of reality, imagination and being. I found myself drawn to various esoteric subjects ranging from comparative religion and mythology to Jungian psychology, alchemical and tantric symbolism, exotic physics and the frontiers of consciousness and dream research.
But it was these unique dream experiences that would awaken an undeniable call to devote myself to the development of a numinous artistic vision. A new beginning in my creative journey arose after a series of peak dream experiences that culminated at the age of nineteen. These “supernatural events of the soul” comprised of out-of-body experiences and lucid “waking” dreams, some of which involved brief encounters with mysterious adepts or messengers. On three occasions during my lucid dream practice I awoke enveloped in a fiercely radiant golden light, moving rapidly towards its blazing white center. Upon opening my eyes, I felt what could only be described as a sense of being reborn. Everything around me looked new, and I felt this wonderful sense of peace and clarity that would last for months. Whether real or illusory, these experiences inspired in me an acute sense of the astonishing miraculousness of everything.
To this day I feel that somehow these experiences may have caused an acceleration in the progress of my artwork. Perhaps this leap in my artistic ability was the result of my newfound focus and devotion, but what was unfolding was an imagery that would be the basis of my work today. Many years later, it would be the entheogenic experience that would recharge my inspired reverence for the ecstatic visionary possibilities of the imagination.

I would come to view my drawings after this period as mystical love poems to the soul. I would often relate to the female figures of my artwork as dakini messengers or as an anima mediatrix to the dimensions within, the projected mirror of the soul. For me, drawing and painting became soul-crafting.
The imagery began to develop the quality of a revived Pre-Raphaelite aesthetic, or rather a contemporary sacred symbolism with a predominant emphasis on the eternal feminine. I began to master the airbrush which allowed me to create a sculptural photographic look with incredible subtlety. It also allowed me to refine values and design with an almost unconscious immediacy that balanced well with my controlled conscious intent. My approach to the creative process is always a fine balance between order and chaos.